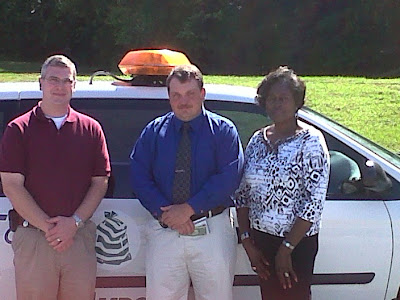 We often hear of government bureaucracy and lack of cooperation between state and local agencies in the news but today provided an opportunity to see what can be accomplished when officials work together.  The Winston County Sheriff’s Office received a vehicle from Mississippi Department of Transportation (MDOT) to use in the Inmate Litter Removal Program (ILRP) across the County’s state maintained highways.
For the price of a cup of coffee, Sheriff Jason Pugh’s Office received a 2004 Dodge Caravan.  As some MDOT vehicles reach certain mileage limits and/or service life, rather than sell the vehicle at auction, MDOT through agreement with local law enforcement, provides the vehicle at a cost of $1 for the Litter Program.
MDOT representative, Matt Dunn, an Assistant District Maintenance Engineer from the District One Office in Tupelo delivered the vehicle on Tuesday morning to the Winston Choctaw Correctional Facility just outside of Louisville.  Dunn stated that the program “not only benefits MDOT but it benefits the county as well. It’s a partnership that pays for itself and saves the taxpayers of Mississippi.”
Each year MDOT spends over three million dollars of taxpayer money in an effort to maintain clean highways throughout our state. The ILRP helps reduce the cost to the taxpayer. MDOT agrees to furnish trash bags, safety vests, gloves and advisory signs. Also, MDOT will reimburse locals for other costs including the salary (not to exceed $10.00 per hour) of the deputy/officer assigned to this program and reimbursement to the local government for travel expenses incurred in transporting inmates to and from the work site. In 2008, those counties and municipalities taking part in our Inmate Litter Program removed over 442,872 bags
Newer Post Older Post Home